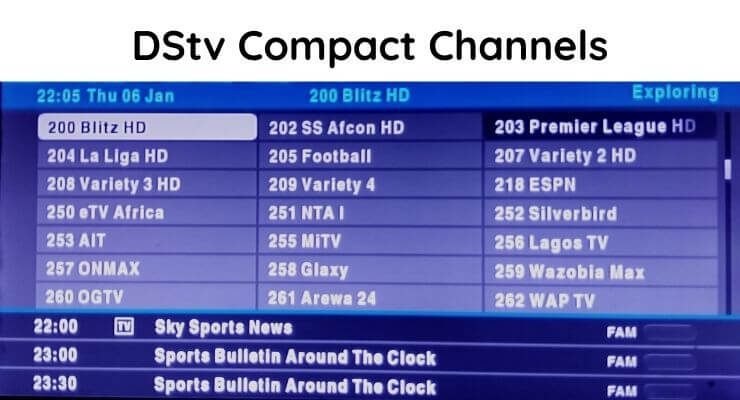 Here is the complete and constantly updated DStv Compact channels list, and the current subscription price for the year, 2022. This list is for residents of South Africa only.

The current price for the Compact package is R429 per month. No changes have been made to the price increase announced last year. There are currently 215 channels on DStv Compact, including audio and radio stations.

You can find the complete DStv compact channels 2022 below. It’s a long list loaded with some of the best TV networks you will find in this part of the world.

If you are missing out on new episodes of your favourite eExtra show, don’t panic! There are DStv alternatives to let you watch top TV shows such as Elif.

Hello, Cartoon lovers! DreamWorks, a new animations TV network is now on DStv channel 304. Tune in at any time of the day to watch new and exciting characters.

As for updates, check the list above for the updated version of the DStv Compact channels list 2021. However, you have to know that Maisha Magic Movies was added to this package towards the end of the year.

ME (channel 115) was also added while M-Net City was removed. This was done in a bid to curtail the excessive repetition of movies on popular TV networks.

Now that we’re into the knock stages of Europe’s most exciting soccer competition you won’t want to miss out on any action. The good news is that if you’re connected to this package, you’ll be able to watch live UCL matches wherever you are.

The UCL final 2022 will be aired live on the DStv Compact package on SuperSport Premier League (DStv channel 203).

Repeats will be aired on the same channels after the live matches.

While some of the movie channels can only be viewed on Premium and Compact Plus. There are still a lot of options for users on this package.

For more entertainment options, go for ShowMax. Those two items will give you more movies and TV shows for your family and business. BoxOffice is also a great complement for the Compact package if you are using DStv Explora or a PVR decoder.

Recommended Article: Compact versus Compact Plus.

Since broadcasting networks like SuperSport are still paying a lot for coverage of live sporting events, you may have to be on the pricey packages to get the best of sports. But DStv compact customers will still have good sports channels such as BLITZ, SS PSL, SS Premier League (dedicated soccer channel for the Olympics), SS LA LIGA, SS FOOTBALL, SS VARIETY 3, SS VARIETY 4, ESPN, WWE Channel, and TellyTrack.