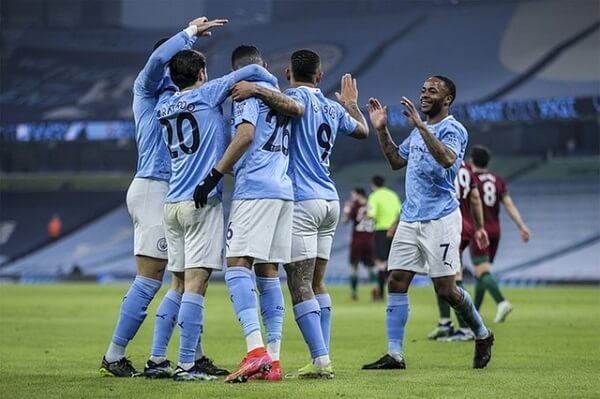 The 2022-2023 English Premier League kicked off on Friday the 5th of August, 2022. Manchester City are the current champions of the 2021-2022 season after a dramatic win against Aston Villa which was very much like the magical win as a result of Aguero’s stoppage-time goal a decade ago. This time it was another magical win produced by İlkay Gündoğan’s simple finish from a beautiful pass by the amazing Kevin De-Bruyne.

It was an eventful final matchday at the fully packed Etihad stadium. The game was a must-win for Manchester City as it all came down to the final day to decide who will win the trophy.

The match took a funny turn when Villa’s Cash opened the score line with a beautiful header. And in the 69th minute, Coutinho put another one past Ederson. Before the 71st minute, Man City were two goals down and it all looked like Liverpool were going to be Champions at the end of the day.

As a City fan, it was a bit like watching a horror movie just that this one was happening in real life.

But for some unknown reason, City’s players refused to give up. Arguably the most brilliant subs of all time, @Pepteam brought on Rahz and İlkay. Things turned around in a flash.

Sterling, operating on the right made a cross to İlkay Gündoğan, who rose to the occasion, heading the ball past Olsen to make it 1-2.

This goal became like a beacon of hope for Manchester City. They believed they could do it again and they kept on pushing for it. And then came Zinchenko – the little Ukrainian magician. He probably said to himself that if his country couldn’t win the war against Russia, he was going to win this war against Aston Villa.

Zinchenko made a good run on the left flank and sent a pass to Rodri who just hit the ball hard with precision towards the post at the 78th minute, levelling the game. It is 2-2 – a stalemate! City is not safe yet. They must win this game to be champions.

Liverpool on the other hand who were also playing her final game of the season against Wolves were on level terms at the time. They were elated already. A draw was all they needed to be champions if things stayed that way but City wasn’t done just yet.

Then came the phenomenal Kevin De Bruyne with a sublime pass to the left-hand corner of the post and İlkay Gündoğan, the super-sub who happens to have a knack for being at the right place at the right time just clipped it in. It only needed a simple touch and the ball would be in the net. And that was it!

City became Champions of England for the 2021-2022 premier league season. It was not an easy fight but it was worth every moment.

Can City do it again?

The question that will be on every football fan’s lips is “Can Manchester City retain the 2022-2023 Premier League title?”

There is a huge possibility of seeing it happen. However, it is not going to be a walk in the park. The drama of last season has shown that as things stand now Liverpool and Manchester City are the two major contenders for the league every season.

But this might be a tougher season than last the one with other clubs improving their squad depth. Arsenal getting Gabriel Jesus and Zinchenko from Man City has dramatically improved the quality of the Arsenal team, especially in the attacking department.

Conte being a high-profile coach and serial winner can spring some surprises with Tottenham. Chelsea may be in the race if Tuchel can get some new good defenders and attackers while the arrival of Sterling from Man City will help improve Chelsea’s attack.

Though the eventual winner of this season’s EPL title may be either Manchester City or Liverpool, it will definitely not be a walk in the park for either of them because other teams also want a piece of the pie.

However, Manchester City have an advantage over every other team in the premier league and that’s their ability to win more games than every other team. Let us look at City’s performance in the last five seasons.

In the 2017-2018 season, when Guardiola’s men put up one of the best displays in English football history, Manchester City had 32 wins, 4 draws and 2 losses, giving them the first ever centurion status. They became the first team to have 100 points in the history of the English Premier League.

So in the last 5 seasons, Manchester City has won the league 4 times. They only lost the league to Liverpool in the 2019-20 season because Liverpool was no match for anyone, winning 6 more games than Man City.

But now, since Man City have a bigger advantage of winning more games, they stand a chance of winning the league again this 2022/23 season.

If Man City could win the league without a primary striker, how dangerous will they be with the addition of two prolific strikers? City now have two strikers – Erling Haaland and Julian Alvarez and these are not average guys. Man City don’t do average!

Erling Haaland played 88 games during his time in Dortmund and scored 85 goals; Julian Alvarez scored 41 goals for River Plate in the just concluded 2021-2022 season. These are goal poachers.

And with the presence of stars like Foden, Bernado, Gundogan, Mahrez, Grealish and the most reliable Kevin De Bryune who destroys any defence with his sublime passes, one can confidently say that Manchester City will definitely win winners of the 2022-2023 English Premier League season.

But then it is not going to be a walk in the park for Manchester City, as other teams will put in a good fight for the title as well. Their arch-rival, Liverpool, is also looking to win the league this season. Liverpool came very close to winning the league last season but they fell short with just one point difference. If Liverpool can win more matches like they did in the 2019-2020 season, they will win the league.

There are many goalkeepers in the league that are better than Ederson but the way City plays by holding more possession and putting pressure on the opposition plus the fact that Ederson is good with his feet and can even give assists does conceal how unreliable and average Ederson really is.

Once the opposition successfully go past City’s defenders, it’s almost always too easy to get the ball past Ederson and into the net. His weakness in conceding cheap and simple goals might cost City the EPL title.

I believe if Pickford played for Man City I believe he will keep at least 22 clean sheets per season. Guardiola’s philosophy and love for Ederson blind him from realizing that this is Man City’s weakest link.

City need a better goalkeeper, one who is good with his hands first of all. He can always learn how to play with his feet later.

City also need to consider how they defend as a team because they are weak in the transition. When they lose the ball, they do not seem to have a lot of composure. Pep on the other hand prefers to use his defenders as midfielders and wingers thereby leaving the back line open to a counterattack.

This kind of play will cost them when they play against teams that are good with counterattacks. Their nemesis, Tottenham, will most likely do them a double again this season as Ederson is usually clueless whenever he faces Son and Kane.

Manchester City has a very predictable style of play and they are weak when they defend, any team that can be disciplined and tactical on the counter can hurt City at the end of the day. Tottenham and Crystal Palace did prove this last season.

However, despite their weaknesses, Man City remain the number one contender for the league. All they need to do is be consistent and win most of their matches.

If City can win 32 games with only 2 draws and 4 losses, then they can win the league with 98 points, provided Liverpool and other teams have less number of wins with more draws and losses. They have done it before and they can always do it again.