Who Are The Contenders For The 2022-23 Premier League Title? 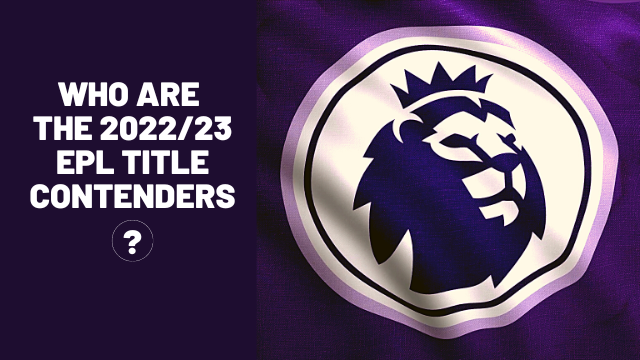 The undisputed number one contender for the title is of course Manchester City football club. They have shown their quality in the last 5 seasons, winning it four times out of five.

Though most football fans may not want Manchester City to retain the title because it obviously looks like an undesirable and worrisome dominance of English football by Pep Guardiola, one cannot in his right mind write off Man City from retaining the league.

There are three things that can stop Manchester City from winning the league this season:

But if they can manage these weaknesses properly, then they do stand a huge chance of retaining the league.

Besides, if they could win the league last season without their primary number 9 in the person of Aguero, why would they not win the league this time around when they now have Erling Haaland and Julian Alvarez?

Liverpool is a serious contender for the EPL trophy. We are talking about one of the best teams in Europe at the moment. Their high-pressing football makes them win many games by forcing the opposition to make mistakes in the final third.

Liverpool players are like gladiators on the field. They give their all in the game, playing with their whole might until the very end. The team is compact and complete in all departments.

Though Sadio Mane is off to Bayern Munich, it doesn’t reduce the aggressiveness of their attack in any way. Diaz will be running down defenders on the left flank while Salah will be doing his damage on the right.

Their recent signing Nunez with a combination of Firmino and Arnold can destroy any defence in the world. Plus they have a great goalkeeper in Alisson Becker.

The squad depth in Liverpool’s team is impressive and if they can replicate their 2019-2020 performance then they stand a great chance of winning the league.

All Liverpool needs to do is win more games than Manchester City and the league will be theirs. If they don’t win the league, they should be able to compensate for that by winning at least one of the available trophies for grabs in addition to the Community Shield silverware they just obtained last weekend.

City is currently the major reason Liverpool football club cannot dominate the English top flight football, and they remain the only reason Liverpool may not win the league for the second time in 30 years.

Manchester City was in their worst form in the 2019-2020 season which saw them lose up to 9 games. This was the edge that Liverpool needed to win the league that season.

For Liverpool to win the 2022-2023 EPL trophy they will need to be better than their previous best. They need to win at least 32 games while Manchester City on the other hand must win fewer games.

Though this may seem like a herculean task, Manchester City has more weaknesses in their team structure than Liverpool and this is a great opportunity for Liverpool.

Conte took over the club in November 2021 and has so far had some incredible achievements in such a short time. He has revived the entire Spurs team and rejuvenated the Kane-Son partnership.

Before the arrival of Conte, Harry Kane was only a shadow of himself but Conte has gotten the Harry Kane juice flowing again.

Conte has qualified Spurs for the Champions League, which didn’t seem possible with the former coach. Tottenham is once again a competitive team in England.

There is something awesome about Conte — he is a serial winner! He never settles for average. He loves to make a massive impact wherever he goes. He likes to make a statement. His time at Juventus, Chelsea and Inter Milan reflects the kind of quality he has.

There are coaches and then there are trophy-winning coaches – Antonio Conte is a trophy winner and a league winner.

Antonio plays an impressive attacking football which usually crumbles his opponents, except of course when he plays against the tactical Jose Mourhino, who will pack the bus and launch a counter-attack thereafter, as Tottenham experienced recently in Israel.

However, this takes nothing away from Conte and the rejuvenated Spur’s team.

His coaching style is very commendable as he is excellent at motivating his players to give their all on the field. He is so passionate about the game and his leadership qualities are off the hook.

Conte is currently building a formidable team in Tottenham. With the kind of drills those players did during the preseason, I think Tottenham will be one of the fittest teams in the English Premier League in this 2022-2023 season.

Spurs will definitely be a tough team to beat for every team they face this season. They have a good goalkeeper in Hugo Lloris, whose heroics can often be relied on. If they don’t suffer a lot of injuries to key players, they will really have an impressive campaign this season.

Conte loves challenges, especially one that allows him to prove his worth by winning trophies. He loves to make a statement! Tottenham may just be one of Conte’s greatest success stories.

He has a dream to become ‘The Klopp of Tottenham’ if the board of Tottenham and Levy will give him some time and all the needed cooperation to fulfil this dream.

If Spurs will be smart enough and do whatever it takes to keep him (apart from the money released for him to get new players), one thing is certain – Conte will put an end to Tottenham’s trophy drought and get them a silverware.

Tottenham may not win the Premier League this season but they will make a loud statement.

One cannot totally write off the under-dogs like Arsenal, Manchester United and Chelsea who may pull a surprise on everyone this season.

Arsenal might just surprise football fans all over the world with an unexpectedly impressive run this season. Mikel Arteta seems to be building a formidable team in Arsenal currently, especially with the arrival of Zinchenko and Jesus from City.

Arsenal may not be outright contenders for the EPL trophy this season, but they are strong contenders for the three other trophies. If Arteta can get his defence right, they should be able to get to the semi-final of any of the other competitions.

Erik Ten Hag is a great coach. His time at Ajax has proven the quality he has. But he has so much work to do in rebuilding 13 times champions, Manchester United into a formidable team.

He will not be able to achieve much in his debut season at Manchester United. The best he may achieve is to finish 4th on the table at the end of the season.

Thomas Tuchel may need to review some of his tactics or maybe he doesn’t have new methods of motivating his players because there seems to be a bit of apathy in this Chelsea team.

Apart from getting some new great players, Tuchel needs to get his team firing from all cylinders again. If he can get a top-notch striker and creative midfielder to form a solid attacking triangle with Sterling, then Chelsea probably stands a chance of contending for the league.

Tuchel has the quality, but can he pull it off?

The 2022-2023 premier league season will most likely finish with the top six teams being Manchester City, Liverpool, Tottenham, Arsenal, Manchester United and Chelsea and either Manchester City or Liverpool will lift the trophy. But we all have to wait till the end of the season to see how this pans out.